Many drum beats ago, when the East was still the West, the sky still one with the sea, love abounded.  A man of sorts & a woman of sorts lived together in love, passion & peace.  They dreamt together, about the worlds they could form, the colors & the textures, the depths & the heights. The two, better described as one, knew no time. They felt no presence except that of infinite love.

At once, which still was never, since there was no now….they, together as one came to a singular mind to fulfill their dreams of a land, a place where they could be…not the being that they currently or never or always knew, but a place that would contain them. A land that would be an icon of the beauty between them, the colors to describe their love, the texture to describe their emotion.  The man of sorts & woman of sorts dreamed together to make a living substance that would please the other in themselves.
Secretly while unhidden they together formed themselves into something that the other could enjoy.  The man of sorts changed to a winding thing, something that moved freely over the foundation they formed.  He was invisible, but his presence could be felt by the other.  The woman of sorts revealed herself as a form that rocked, swelled & crashed. The two lived abundantly, finding delight in each other, together, as a wind and wave.
Because they had separated the oneness of the two, time was created. It lay as a reminder of times past…drum beats in the distance. When they felt enough days had gone by and they desired to join together again as one, the time joked with them and promised that tomorrow it would allow the joining to resume.  As time has told, it is a liar and cheat…never telling the truth, stealing some hours away and giving length to unwanted hours.  Tomorrow turned into yesterday, and someday turning its face to one day never coming.
The wave of sorts pushed on the foundation, trying to raise herself into the sky, but it only made her fall into pools, raising other parts of the foundation into the heights of peaks.  She waved to the tips, but still was unable to reach the air.  The wind of sorts grabbed at the wave, trying to lift her into the heavens, but it was to no avail. He blew himself round, but it only stirred the waters & did nothing to the foundation.
The water and the wave saw that they had dreamed to love each other differently but never saw that the love they held before had been perfect.  The waters found a secret place on the foundation, one unfound by time. There she pressed her face into the foundation & wept. She wept and wept so much that she filled the foundation with the sea.  The wind met her there, and vowed to forever wipe her tears with his breath. Together they stay, her crying for her love & he caressing her cheek with his unending love.
To this day, you can see her face, behind the waterfall…. 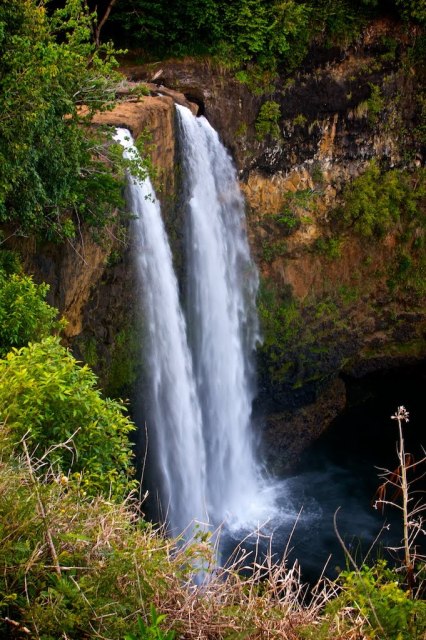