It’s Easter, and this last week has given me some great things to think on as I remember the reason we celebrate today.  I’d love to hear your thoughts too, so if you read this & want to share how God has spoken to you this week, please share it!

Last night, I was reading a book called “The Great Escape” which are short devotionals, and the first entry had the same name as the book.  It reminded me of someone I had known about and someone I had not. The person I had not heard of earlier was a woman named Mrs. Emma Smith.  She prided herself on being someone who had lived underground in a casket for longer than anyone had before!  She was down there for 100 or so days…..and thinking about this, you’d be astonished! But she had help…there was electricity, heat, a phone, a tube to send down food & water, and the casket was big enough that she could move around in.  None the less, she lived in a casket underground for a very long time, and when she came up out of the “grave” she felt proud that she had done something no one else had.

The second person was Houdini.  A man who mastered skills of unlocking locks of various kinds without using a key!  He was able to lock himself in unimaginable spaces, and get out without ever using a key. He even learned how to live on very little air, so he could stay underwater or in buried places for a long time without dying!

Both of these people were known in their time for incredible feats that no one else could do.  They were able to be confined & “imprisoned” of a sort, and yet amazingly enough they were able to escape!  However, at some point, both of these people would not be able to escape death.  As amazing as these people were to many people, Houdini’s life came to an end by a simple blow to the stomach & Emma would eventually be put into a grave that she wouldn’t get out of 100 days later.  Neither one of them could escape that fate.  But there was someone who did!

Jesus, after three days in the tomb, conquered death & was able to walk out of the grave.  Walk out. Not be taken out, but he left on his own accord.  The grave could not keep him inside.  And what is more, is that by HIS great authority on heaven and earth, and by HIS divine power, WE can also defy death’s grip…for when we are believing in God & find ourselves at the door of death, we shall not be defeated, but rather welcomed into the greatness of His glory in heaven forever & ever!!!!!  Like Psalm 49:15 says, “God will redeem my soul from the power of the grave, for He shall receive me.”

What a powerful promise.  And we can trust that God will remember this because He said “I will never leave you or forsake you.” (Joshua 1:5) We are also reminded again of this through Deuteronomy 4:31 which says “The Lord your God is a merciful God. He will not abandon you, destroy you, or forget the promise to your ancestors that He swore He would keep.”

What an amazing & powerful God we serve, that His Son would not be held by the grave, but would rise to life. And even more that He would offer that life to us as well as we trust in Him to sustain us throughout our life here on earth & as we pass on to eternal life with Him.  Happy Easter & Praise be to Christ who is no longer bound by death but has freed himself & claims us up with Him. Hallelujah! 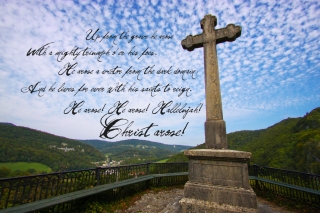 2 thoughts on “No longer bound”